Janet began painting in l996. Initially her interest in visual arts was sparked during an art and movement workshop, conducted by the late American artist, Barbara Mindrell. During the workshop, she gained more insight to the power of creative expression. She continued to immerse herself in workshops at Art Gallery Ontario, Toronto School of Art, and with artists Brian Burnett and Tina Poplowski to further develop her style, techniques and approach to painting.

Dancer, artist, writer, advocate and sexual assault survivor, Janet has a deep understanding of the healing capacity of the arts, and the importance of creative expression. Through dance, she reclaimed her body. Through painting, she was able to access a space for quiet and calm. Through writing, her voice. All of which continue to play an integral part in her life and work – finding her strength and reclaiming her voice as a woman, and artist.

Janet Goldblatt Holmes has worked tirelessly as an advocate in the fight to end violence against women. Through her work with The Voices and Faces Project, as The Stories We Tell Outreach Coordinator, she has gained a deeper understanding about the issue of gender–based violence and other human rights issues. Janet believes that creative programs are so important to a survivors healing, and what has become clear, is that her creativity, artistic endeavors and work with The Voices and Faces Project have opened her heart and continue to be her “raison d’être”.

My inspiration for painting are landscape and the flow of movement within them. The inherent calm, majesty, and the ever-changing rhythms of nature are what carry me forward in my life and artistic endeavors. Some paintings are created in my imagination; others, a culmination of places which I have visited, both within my native Canada, and abroad. I work in both acrylic and watercolor, adding various mediums, including molding paste, gesso, and gels to layer, add texture and create new dimension to the work. 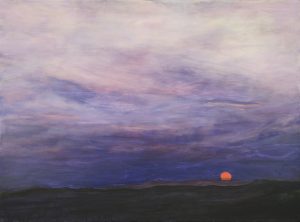 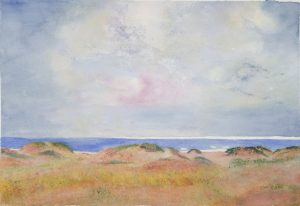 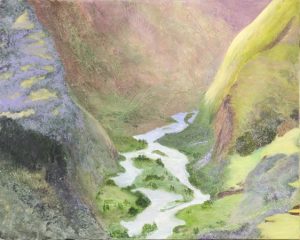